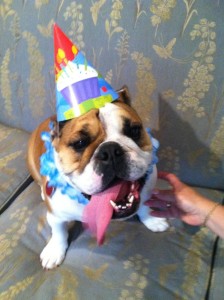 This is Roxy.  As you know she is our mascot.  Roxy was sent to us from heaven.

Justin always wanted a bulldog named Rocco.  He would talk about this dog and how much he loved it when in fact, he never had it.  Well. I made a promise to Justin that I would get a bullie for him.  So in September of 2011, Dan Justin’s oldest brother, worked in a pet store.  He called me and said that they had a bullie that they were placing up for adoption because of some surgery that was needed and that we could have it.  WOW!!!  I almost fell on the floor.  This didnt happen!  A bulldog for free?  Crazy enough, this cute little bullie was around in May of 2011.  Dan actually sent Justin pictures of her showing her how adorable she was.  For some reason, nobody bought her!!!  This almost never happens with these dogs.  But in this case it did.  Why you ask?  Well because she was waiting to come to us.  So with a little help, from heaven and her angel, Justin, Roxy has joined our family.  Its not a Rocco, but Roxy will do.

Happy Birthday Justin!!  We love you!!

A very real and personal story shared by Aunt Rachel.  This is the tragedy that effected our family.  This is the reason why prevention needs to be spread.

A Tale of Two Cousins

Every summer since I can remember, my husband’s family has gathered at the New Jersey shore, where he and his three siblings grew up.  All together, we were a group of eighteen, ten adults and eight cousins.  These yearly reunions were a wonderful time for the kids to reconnect after the long school year.  There was nothing quite as beautiful as watching them ride the waves together.  The picture to the right, taken in July 2010, shows the smiling faces of cousin Bobby (16, from Houston, TX) and cousin Justin (20, from Freehold, NJ).

The two boys couldn’t have been more different.  Justin was outgoing and boisterous, and had the ability to captivate an entire room with his big personality, humor and generosity.   When he was in high school, Justin was a state-ranked weight lifter, an all-county football player and captain of the football team.  Bobby, on the other hand, was a quiet observer with tremendous wit and charm.  He was a gifted academic with a scientific mind, likely of genius intelligence, earning a nearly perfect grade point average as well as a nearly perfect SAT and advanced SAT scores.

Yet, despite their differences, they had one thing in common:  An addiction to prescription medications that ultimately resulted in their deaths.  Justin was 21 years old when he died.  Bobby was just 17.

Justin started using marijuana when he was 14.  By the time he was a senior in high school, he also started  to use prescription pain medications recreationally.  Once in college, his recreational use turned to addiction, and after one semester, he failed out and returned home.  His parents had absolutely no idea that he was using prescription pills and thought his return was because he was home sick.  In 2009, while attending community college, Justin ‘totaled’ his car.  Admitting marijuana abuse, Justin wanted help so in 2010, his parents found him intensive outpatient treatment.  But then in 2011, expensive items in the house went missing, yet the theft was a mystery.  Justin’s parents did not learn of his addiction to prescription medications and heroin until he was stopped for a traffic violation and police found a needle and a pill in his car.  Justin willingly entered a 30-day rehab program and soon thereafter, moved to a sober living facility.  On July 13th, 2011, just days after a family gathering, Justin was found dead in a hotel room;  the cause of death was drug overdose.

Bobby’s path to addiction was the same as Justin’s.  He too started using marijuana heavily when he was 14.  At 15, his recreational drug use escalated significantly.  His mother’s pain medication, prescribed as part of her breast cancer treatment, went missing.  Initial thoughts of Bobby’s involvement in the theft were disregarded, as it seemed preposterous that this high-achieving student would take drugs.  Despite the lock that was then used to safeguard the medication, it continued to disappear.  Bobby’s mother lost her 9-year battle with cancer on March 1, 2011, just three months prior to Justin’s death.  Bobby, now 17, vowed to use his gifted mind to help find a cure for the deadly disease that took his mother so early.

In late October 2011, my husband and I went to Houston to visit with the family.  During our stay, Bobby and I planned to work together to finalize his college application; he had his heart set on Princeton.  Just moments after we arrived, my brother-in-law informed us that Bobby had recently confessed to being a prescription drug addict and asked for help.  He had recently stolen $8K from his dad’s account to buy medications on-line;  but now that the money was gone, he was out of options.  We were stunned and devastated to say the least.

We had no idea what to do.  Justin’s father, Bobby’s uncle in New Jersey, begged us to take him to the hospital or call the police, as he wished he would have done for his son.  Bobby refused to go to the hospital and foolishly, we worried that a police record could interfere with college acceptance.  Instead, we took him for an evaluation at an out-patient rehab center.  The evaluation took half the day.  Because of HIPPA laws, the addiction specialist could not tell us what she learned from Bobby about his use, but did tell us that he was one of the heaviest users she had ever encountered and  was already far down the road of addiction.   He would need, at minimum, 30-day residential (in-patient) treatment.

Although Bobby told us he was an addict, we had absolutely no idea how serious the problem was until that moment.  Yes, in retrospect, there were signs of drug abuse that we attributed to teen behavior, but it was impossible to reconcile this expert opinion with the person we thought we knew.  Unlike Justin, whose world fell apart because of addiction, Bobby was functioning almost as usual.

By 8pm that evening, we completed all the paper work for his admission to the residential facility which was to take place at 8am the next day.  Tragically, Bobby didn’t make it through those 12 hours.

On October 25th, at 6am, his sister and I found him dead in his bed.  He took heaping doses of some of his father’s accessible medication and sent a text to a friend.  He couldn’t imagine loving anything more than his drugs.  Bobby died just a little over three months after Justin.

These young deaths have devastated and forever-altered every member in our family as well as members of Justin’s New Jersey community, Bobby’s Texas community and our own community here in Maryland.  Prior to these events, I had absolutely no idea that prescription drug abuse was an epidemic in our country.  Even though I have a master’s degree in Public Health from Johns Hopkins and worked in psychiatric drug development for over 10 years, I had no understanding of the dangers of prescription drugs, how addictive they are, and how, even with one dose, they can kill.  I had no comprehension of how different and dangerous the ‘drug landscape’ is today as compared to when I was a teenager in the 80s.

In an effort to help save other families and communities from this horror, I am committed to raising awareness among both adults and children, because knowledge is the best form of prevention.  I now know that prescription drug abuse is everyone’s problem because it doesn’t discriminate by race or socioeconomic status; everyone is at risk. I work voluntarily as a Parent Partner with The Partnership at Drugfree.org, a national non-profit organization whose mission is to help solve the problem of teen substance abuse.  As a Parent Partner, I have access to scientific information, educational programs, and professional assistance.  Please help me honor Justin and Bobby by allowing me to share these resources with you.

More
I will stand my ground to  announce that  “An ounce of prevention is worth a pound of cure.”  In this case a life.  If we could implement programs like this, we could make a difference.
Home » News » Substance Abuse News » Prevention Program Proves Effective for Substance Abuse

In a new study, researchers at Penn State and Iowa State University found that young adults cut their overall prescription drug misuse up to 65 percent if they are part of a community-based prevention effort while still in middle school.

The reduced substance use is significant considering the dramatic increase in prescription drug abuse, said Richard Spoth, Ph.D., director of the Partnerships in Prevention Science Institute at Iowa State.

The research, published in the American Journal of Public Health, focused on programs designed to reduce the risk for substance misuse.

Teens and young adults also had better relationships with parents, improved life skills and few problem behaviors in general. These findings are reported in a recent issue of the journal Preventive Medicine.

The research is part of a partnership between Iowa State and Penn State known as PROSPER — Promoting School-Community-University Partnerships to Enhance Resilience.

PROSPER administers scientifically proven prevention programs in a community-based setting with the help of the extension systems in land grant universities.

“An important reason that the PROSPER programs are effective in reducing early substance use and conduct problems is that they are carefully timed to fit the needs of early adolescents and their parents,” said Penn State’s Mark T. Greenberg, Ph.D.

The results are based on follow-up surveys that Spoth’s and Greenberg’s teams conducted with families and teens during the six years after the teens completed PROSPER.

Researchers developed the prevention programs in the 1980s and 1990s to target specific age groups. A key aspect of the program is understanding when and why adolescents experiment with drugs.

“We think the programs work well because they reduce behaviors that place youth at higher risk for substance misuse and conduct problems,” Spoth said.

“We time the implementation of these interventions so they’re developmentally appropriate. That’s not too early, not too late; about the time when they’re beginning to try out these new risky behaviors that ultimately can get them in trouble.”

PROSPER intervention includes a combination of family-focused and school-based programs.

The study involved 28 communities, evenly split between Iowa and Pennsylvania. The programs start with students in the sixth grade. The goal is to teach parents and children the skills they need to build better relationships and limit exposure to substance use.

“Two skills that students learn in the school-based programs are how to be more assertive and how to solve complex situations with their friends,” said Greenberg, founding director of Penn State’s Prevention Research Center for the Promotion of Human Development.

“As a result they are more comfortable with refusing to do something that might lead to trouble or doing things that they will later regret.”

And parents say the program works.

Experts say the ongoing community partnerships are evidence of the PROSPER program’s sustainability.

Researchers say that the outcomes extend beyond a reduction in prescription drug or marijuana use.

That is, substance abuse often leads to other problem behaviors, so prevention can have a ripple effect and cut down on problems in school and violent behaviors in general.

Accordingly, program benefits may be measured in economic terms as well as the overall health and outlook of the community.